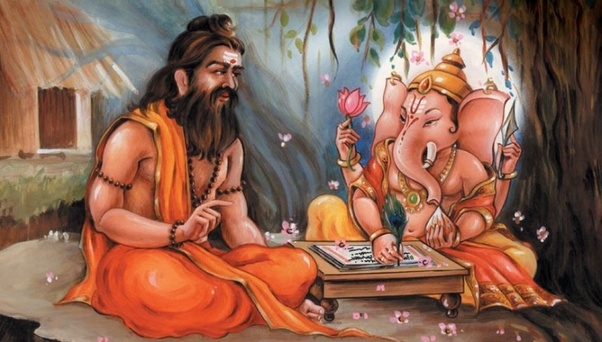 Around 4 decades ago, there lived a little boy in a small town in Bengal. He was the first in his generation and a favourite of his grandfather. His grandfather had served in the British Army pre- independence and had been posted to different places in and around India. Post-independence, he had owned coal mines and later had been a Manager in one of his own coal mines.

His grandfather had named him Ramdas, a synonym for the mighty Hanuman. But every one called him Ramu now. Little Ramu loved his grandfather. During summer vacations and Saturday nights, he would spend hours lying down beside him; immersed in the adventures of his Dadu (Grandfather in Bengali) in the British Army and in the depths of the coal mines. But his favourite stories were that of the Puranas and the Indian mythology. Apart from being a soldier and a miner and intermittent family man, his Dadu was a treasure trove of stories and had spent most of his idle time reading.

"Tell me a story Dadu", said Ramu. They were lying down in a charpai (rope-woven cot) on the roof of the three-storied house. Dinner was over and the summer sky was sparkling with stars. It was the early 80s and in this small town on the borders of Bengal, the air was clean and soft and crisp. There was a huge water-body a hundred metres from their house, and the frequent drafts of cool air drove the mosquitoes away.

Dadu had recently been warned by the family Doctor-Dadu to quit smoking, but one post-dinner, was still a routine. "Point the Saptarshi constellation out first and you will get a story", Dadu said in- between puffs.

Ramu craned his neck and finally pointed in the right direction. "There it is Dadu", he said, eager for the story. "Though my teacher said it was the Big Dipper, a part of Ursa Major".

"Your teacher is right and that is what you write in your exams, but us, Indians, we know better, don't we?", Dadu replied while grounding out the remains of the stub. "Who are the Tridevs?” he asked.

"Right. Now Brahma had seven sons", Dadu settled beside Ramu and started weaving magic with his words. "It was a long time ago. Before the creation of humans and trees and animals. These seven sons of Lord Brahma were the first seven sages or Maharishis - The Saptarshis. They were named Marichi, Atri, Angirah, Pulastha, Pulaha, Kratu and Vasistha. After the Saptarshis, Lord Brahma created the Universe and all life forms.

Maharshi Vasistha married and had a son, Shakti. Shakti fathered a son - the sage Parashar. And the son of Sage Parashar was Maharshi Vyas. Maharshi Vyas was immortal and a Trikalagya."

"What's a Trikalagya Dadu", asked Ramu. This was a new word for him.

"Kaal means time. That what was, what is and what will be; these are the three stages of time".

"Ohhh, so past tense, present tense and future tense, isn't it?"

After spending a considerable time in his studies and Tapasya, Maharshi Vyas or as he is commonly known, Vyasdev, decided to roam the world and get firsthand insight on mankind. He was anguished by the stupidity of mankind. It seemed to him that he had entered the domain of the blind, though with the gift of vision. The Vedas and Upanishads had already been written but remained constricted in the Gurukuls and mostly sages. The common man stayed ignorant. Ignorant of morality, right and wrong, sin and virtue."

Dadu paused and turned towards his grandson, "Do you know the meaning of Dharma?"

"No little one, that's not Dharma. That's a religion devised later by men to differentiate mankind into factions. Our Indian Puranas, the most ancient of all history of mankind, defines Dharma as what is right, what is moral; that which is just and virtuous. Your Dharma as a student is to devote yourself towards studies. Your Dharma as a son is obedience towards your parents and to be respectful of your elders. Your Dharma as a human is to never engage in any act that causes pain and suffering to other humans. Do you understand now Ramdas, the meaning of Dharma?"

"Yes Dadu, it is all so simple when you explain it the way you do. I love you Dadu."

"And I love you little one. Now let's go back to Vyasdev. During his wanderings, what appalled him the most was the ignorance of the masses towards Dharma and Adharma. Vyasdev thought long and hard. How could he better mankind; make them aware and give them the true purpose of their lives. It took years and years of study to master the Vedas and Upanishads. Common man did not have the time nor was it ideal for them. And their ignorance was a constant source of pain to Maharshi Vyas. And then the idea struck him.

Vyasdev retired to his Ashram and composed a ballad in simple language for the masses. Now the second hurdle was to make it available to all mankind. He was deep in thoughts when his great grandfather Lord Brahma visited him. Nothing was hidden from The Creator. Lord Brahma knew the anguish his great grandson was in. Feigning ignorance, he asked Vyasdev the cause of his pain. Vyasdev politely replied, 'O Lord, nothing is hidden from you. I wanted to channel mankind on the path of Dharma and I have composed verses after verses of a ballad which has the essence of The Vedas, Vedangas, Upanishads, Puranas and our history. It has advice on Dharma-Adharma and the ways of life. It has the description and beauty of the stars and the planets and all your creation. I have composed it all but I do not have a writer to pen them and present them to the masses.'

'There is only one writer in this world who will be able to help you', said Lord Brahma. 'Plead Lord Ganesh and request him. He is the one capable of this feat'. And after some more pleasant conversation, Lord Brahma left.

Vyas started praying to Lord Ganesh and the Lord immediately came to him. Vyasdev honored him like the respected guest he was and after exchanging pleasantries told Ganesh of his problem.

'I will definitely be your writer, O Great Sage', replied the Lord, ‘And what you have composed sounds wonderful. But I have a condition. Once I start writing, my pen should never be idle for a second till the ballad is finished.'

There was no one who could keep up with Lord Ganesh, Vyasdev knew very well. Not even him. But the Lord has made his condition known. And Vyasdev needed the Lord's help. So he devised a plan in his mind.

'I agree to your condition Lord. I will keep reciting verse after verse of the ballad and you shall write them without break after understanding the meaning of each verse'.”

"Does your teacher dictate notes in the class?"

"Yes Dadu and we write it in our copies to read later".

"And while taking down the dictated notes, do you try and understand everything that you are writing?”

"No. Those are notes. We simply write during dictations and read and understand them later. If we try to understand and write at the same time, it will make us very slow".

"Exactly Ramdas, no one could keep up with the speed of Lord Ganesh's writing and as his condition implied that his pen should never stop till the ballad was completed, Maharshi Vyas knew that the only way this could be done was if Lord Ganesh had to understand the verse and then jot it down. That would give Vyasdev ample time to recite the next verse and he would be able to keep up with Lord Ganesh."

"Vyasdev was very clever, wasn't he Dadu?" asked Ramu. Dadu smiled and continued with the story.

"Lord Ganesh smiled on hearing Vyasdev. His reputation as a Maharshi was well deserved. 'I agree Maharshi', replied the Lord. 'Let's begin'.

And so it all began. Vyasdev kept composing every verse of his great ballad and Lord Ganesh kept writing them. The Maharshi's trick worked like a charm and never for a moment was the Lord's pen idle because of the Maharshi. And finally, Vyasdev had his great ballad written and completed.

The first person to read and memorize and recite the great ballad was Vyasdev's son, Maharshi Shukdev. Shukdev then taught it to all his disciples, who in turn, went out in the world and recited them for the masses and distributed the written form for all to read.

Our Puranas say that the words of the great ballad of Maharshi Vyas was spread in the Devlok (the abode of the Gods) by Maharshi Narad, by Asit-Debal in Pitrilok (the realm of our predecessors), by Maharshi Shukdev to Asuras, Gandharvas, Yakshas and Rakshasas and by the great sage Viashampayan in the human world.

The great ballad of Maharshi Vyas was everything that he had promised. It taught everyone who read or heard it, the right way to live life with real-life examples. Vyasdev's dream of setting mankind on the right path of morality and justice and righteousness and virtue was finally fulfilled.

"When will I read the Mahabharat Dadu', asked Ramu.

"Soon Ramdas. Very soon. But I hear your mother calling now. It is time for bed."

"Goodnight Dadu. Will you tell me another story tomorrow?"

"Yes little one. I will. Now off you go to your mother and to your cozy bed. May The Creator bless you with Dharma. Goodnight".