With the help from her sons Kadru managed to win the bet from Vinta and as per the condition of the bet, Vinta had to become Kadru’s maid. This happened due to the curse from Vinta’s first son, Aruna. Now as told by Aruna, Vinta started waiting for her other egg to hatch so that her second son can relieve her off this curse. 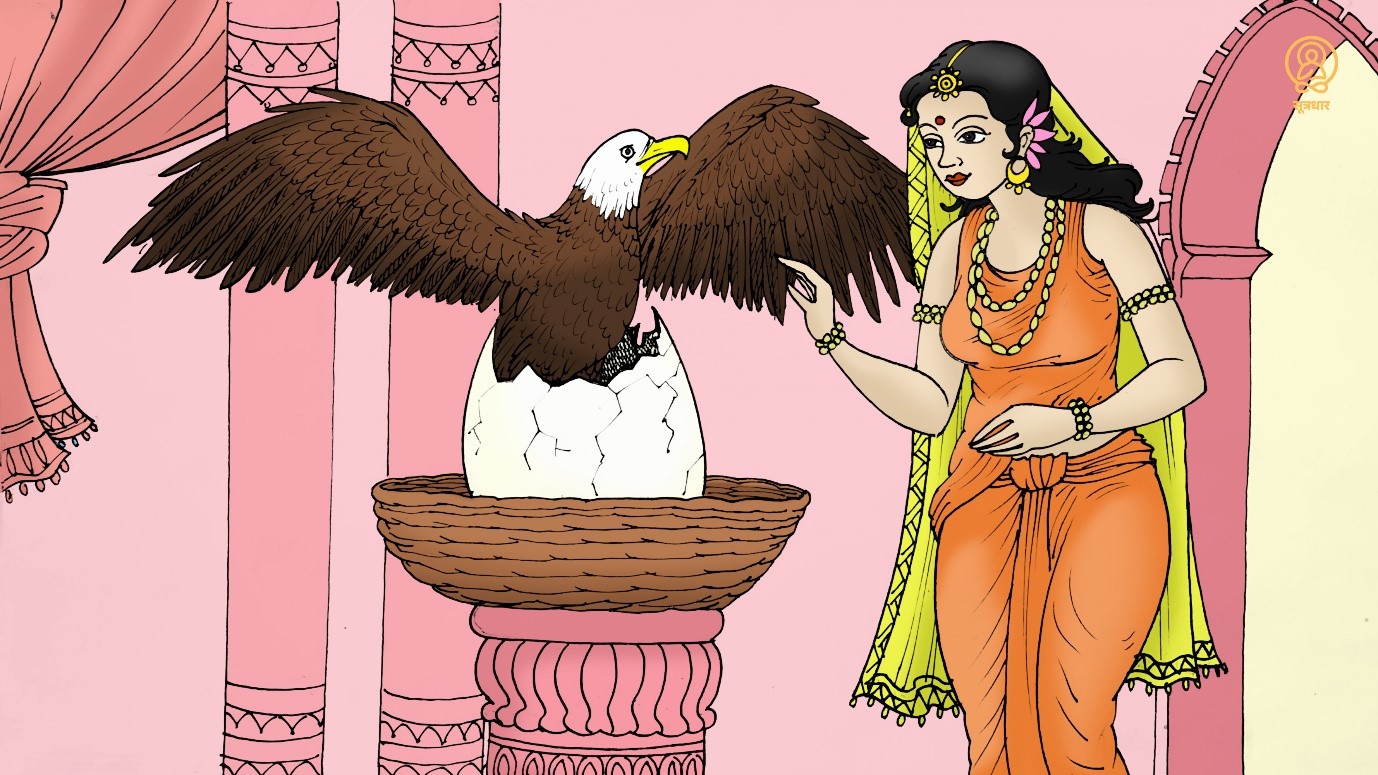 When time came the second egg hatched and mighty Garuda was born from it. He was powerful, fast, agile and grew bigger with every passing day. His eyes were yellow like lightening and body was glowing like fire. When he would fly high in the sky flapping his giant wings, everyone would think the God of fire himself is coming. When Garuda saw his mother serving the mother of snakes, he asked for an explanation. Vinta told her son all about the bet she lost to her sister. 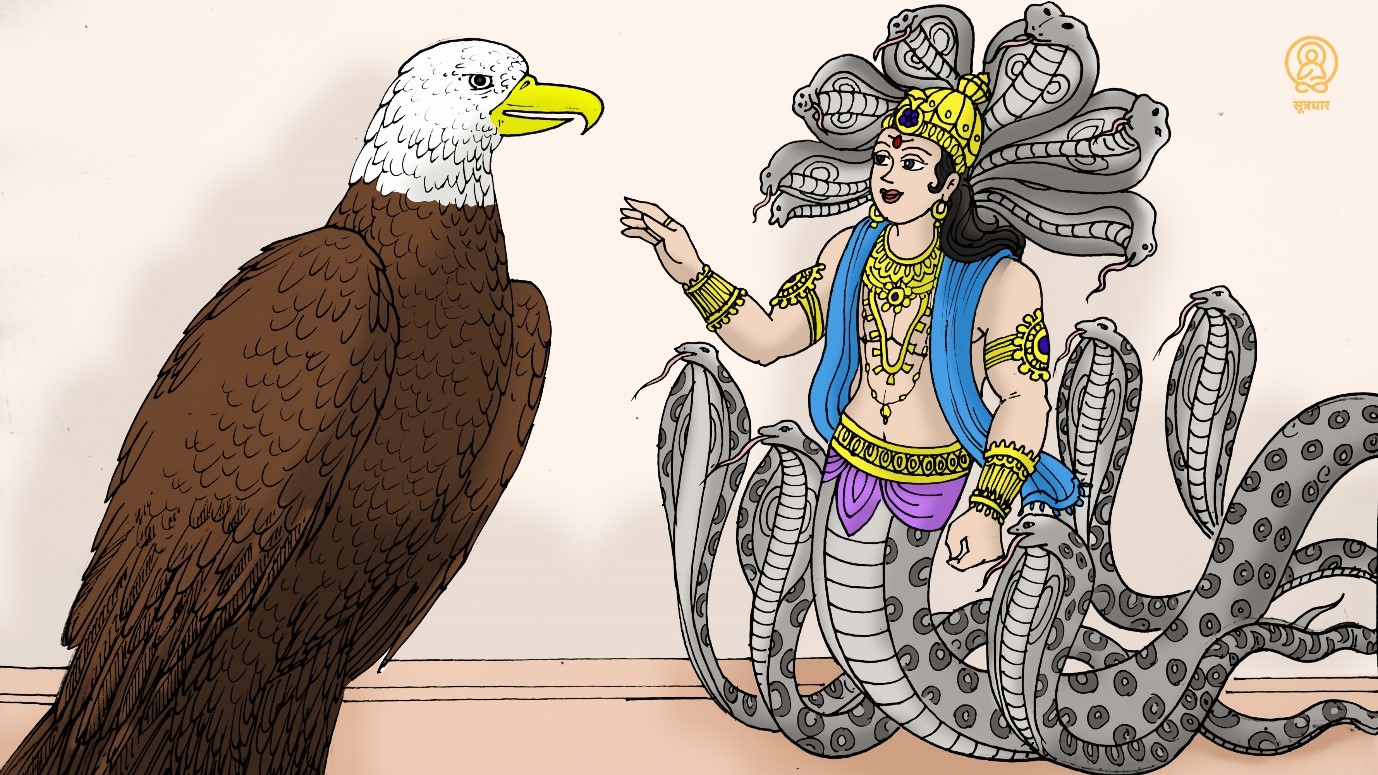 Snakes thought for a moment and said, “O cousin! You are really brave and powerful. Maybe you can do something to relieve us from our mother’s curse. Our mother had cursed us to burn in the fire of Janamejaya’s snake sacrifice. If you could bring nectar from Indra, we will also become immortal and Janamejaya’s fire will not be able to harm us. If you succeed in bringing the nectar from Indra, we will relieve your mother from slavery.”

The God of birds agreed and went on a journey to heaven to get the nectar from Gods. When Indra and other Gods found out that Garuda is on his way to collect from them, they all decided to somehow stop Garuda. However, none of the Gods could stop the mighty bird. Garuda flapped his giant wings and caused havoc in the army of Gods. In the end Indra lost consciousness and Garuda managed to locate the pot of nectar.

When Garuda was flying high in the sky holding the pot of nectar, he was stopped by Bhagwaan Vishnu. He asked Garuda, “O lord of all the flying creatures! If you want to drink this nectar, you must go ahead. You have earned it by defeating the Gods. However, what do you want the entire pot for?”

Garuda replied, “O protector of universe! I do not have any desire for this nectar. I need it to free my mother from slavery.”

Seeing Garuda have no desire for immortality Bhagwaan Vishnu made him immortal without drinking nectar and asked him for a boon. Garuda said, “O God! Please allow my likeness to have a place in your emblem.” Bhagwaan Vishnu said tathastu and fulfilled his wish.

Now Garuda said, “O Bhagwaan! I also want to offer you a boon. You can ask me whatever you desire.”

Narayan replied, “O king of birds! I am beyond desires. Goddess Lakshmi herself is my companion. However, I respect your emotions and I want you to become my ride.” Garuda said tathastu and moved on with the pot of nectar.

By now Indra had regained consciousness and attacked Garuda with his lightning bolt. However, His mighty lightening bolt failed to harm Garuda in any significant way.

Indra finally accepted that he cannot defeat Garuda and approached him with a peace offering. He said, “O King of birds! You are so fierce and mighty. I do not want any enmity with you, instead I wish be your friend.”

Garuda said, “I too have nothing against you. There is no reason we should be enemies.”

Encouraged by this response from the mighty bird, Indra said, “If you do not need this nectar, you must return it to me. Whoever gets hold of this will become immortal and then cannot be controlled. They will cause a lot of grief to everyone.”

Garuda explained everything to Indra. He told him how his mother lost a bet to the mother of snakes and had to live as her maid. He also told him about his deal with snakes to relieve his mother from slavery in return for delivering nectar to them.

Indra told Garuda about their cheating and how Kadru defeated Vinta with the help of snakes through unfair means.

This made Garuda extremely angry and he vowed to eat only snakes from then on. He suggested to Indradev, “O king of Gods! My deal with snakes is to deliver the pot of nectar to them. As soon as I deliver this pot to them, my mother will be relieved off her curse, afterwards what happens with the nectar is none of my concern. I can distract them for some time and give you an opportunity to steal the pot from them before any of them can drink it.”

Thus, after reaching an agreement with Indra, Garuda came to snakes. He kept the pot of nectar on a bed of sharp grass and asked snakes to relieve her mother from their slavery. They agreed.

When they approached the pot to drink nectar from it, Garuda said, “Why are you in such rush? The pot is kept here only and is not going anywhere. You should be in a holy state before you drink it. I suggest you first clean yourself and offer prayer to Gods and then only touch the pot.” 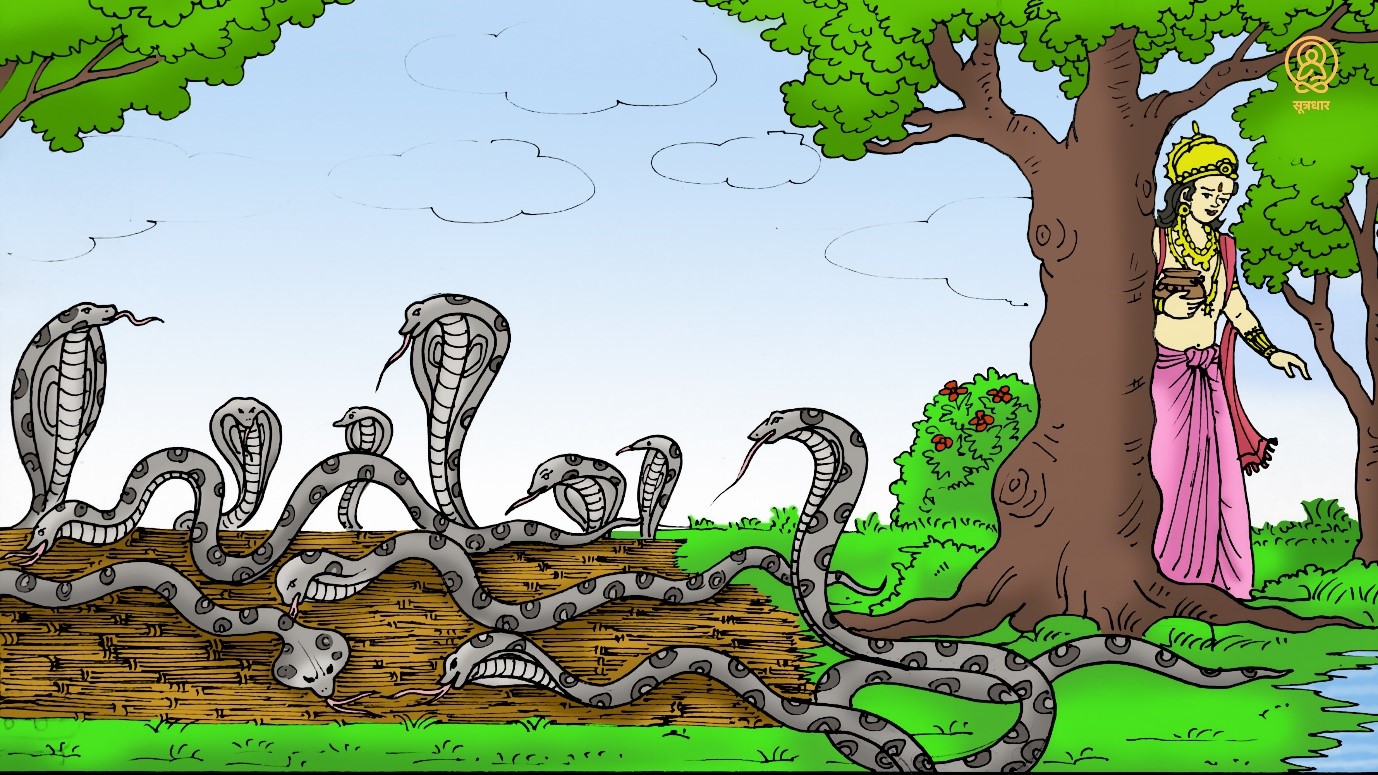 The moment snakes went away to clean themselves, Indra, who was hiding nearby stole the pot of nectar and brought it back to heaven. When snakes returned and did not find the pot, they thought may be some nectar had spilled on the grass and started licking it. The grass was sharp and cut their tongues in two halves.

Thus, king of birds Garuda managed to free her mother from the curse of his elder brother Aruna. In the process he managed to become friend with Indra and accepted becoming the ride of Bhagwaan Vishnu. However, the snakes failed to find a solution to her mother’s curse. What did they do to make sure they survive the snake sacrifice of Janamejaya? We will find out in next part of the story.