In the beginning of time, with the blessings of Brahmadev, thirteen daughters of Daksha Prajapati were married to the son of Prajapati Marichi, Kashyap rishi. Progenies of these daughters became responsible for creation of many life forms in the world. This story is about two of these wives, Kadru and Vinta. Kadru was the mother of snakes, while Vinta was the mother of Arun, son’s charioteer and Garuda, king of birds. What is the story behind the birth of these species? Why does Garuda always eat snakes? To find out the answers to these questions listen to this story narrated in the Adi Parva of Mahabharat. 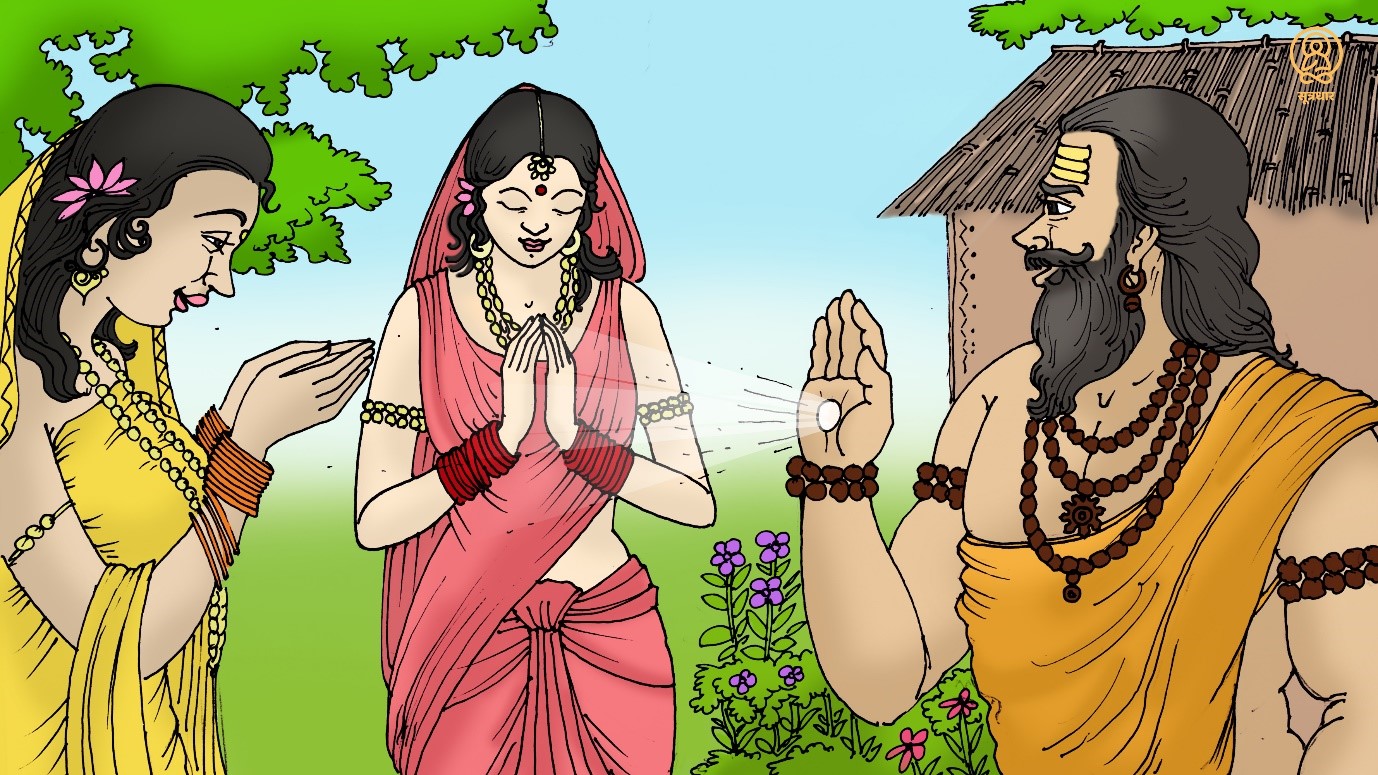 One day great rishi Kashyap called his two wives Kadru and Vinta and offered them a boon each of their choice. Kadru asked for one thousand brave, powerful and enigmatic sons; while Vinta asked for two sons, who will together be better than the thousand sons of Kadru and will lead illustrious lives. Kashyap rishi said, “Tathastu” and went on to perform a long penance.

Vinta’s two eggs did not hatch yet. When she saw Kadru with her sons, she got jealous and broke one of her eggs prematurely. Due to her action, the kid born out of the egg was underdeveloped. His upper half of fully developed, while lower half was not yet fully formed. The kid got very angry at her mother’s impatience resulting into his premature birth.

In a fit of rage, the baby cursed his mother, “Mother! You have pulled me out of my egg prematurely because of your jealousy towards your sister. Now I curse you live as the maid of the same sister. Your second and my brother will be the only one who can relieve you from this curse, provided you allow him to develop fully inside his egg and do not break that also prematurely. If you want my brother to be powerful and have the ability to relieve you from this curse, be patient and do not break his egg.”

After this the baby flew into the sky and ended up becoming the charioteer of sun, Arun. The red light in the sky just before the sunrise if cause by Arun and that is the reason it is called Arunima.

Days passed. One day Kadru and Vinta were roaming in the garden and they saw the divine horse Ucchaishrava. Ucchaishrava was the best among horses and was fast, beautiful and powerful. He possessed divine powers.

Looking at the horse Kadru said to Vinta, “Sister! Tell me quickly, what is the colour of this majestic horse.”

“This king of horses is of white colour. What do you think?” replied Vinta.

Kadru said, “You are right. The horse is of white colour; however, his tail is black.”

Vinta replied, “You are wrong. Even his tail is white.”

Vinta was confident about what see saw, so she agreed to Kadru’s bet. Both sisters went back to the hermitage with a promise to come back next day to check who won the bet.

Kadru knew that she will lose the bet, so she called all her sons and ordered them that they should cover the tail of Ucchaishrava horse, so that it appears black. Most of her sons refused to take part in her deception hence she cursed them to burn in the fire of Janamejaya’s snake sacrifice in Dwapar Yug.

Curse of their mother scared the snakes and some of them decided to follow her instructions and cover the tail of the horse to make it appear black.

Next day, when both the sisters went to the garden to verify whether the tail of the horse is black or white, snakes had it covered. The tail appeared black. Vinta lost the bet and now she was left with no choice but to live as Kadru’s maid. Thus, fulfilling the curse of Aruna.

Who was the second illustrious son of Vinta and how did he relieve his mother off this curse? We will find out in second part of this story.