Story of Sharmishtha, Devyani and Yayati

Sharmishtha was daughter of Danav king Vrishaparva. She was of similar age as Devyani. One day Sharmishtha was going to the nearby lake for picnic with her friends and maids; and suggested Devyani should also join them.

Devyani accompanied Sharmishtha and her entourage in their picnic. After taking shower in the lake, somehow Devyani and Sharmishtha’s clothes got exchanged and they started fighting over it. 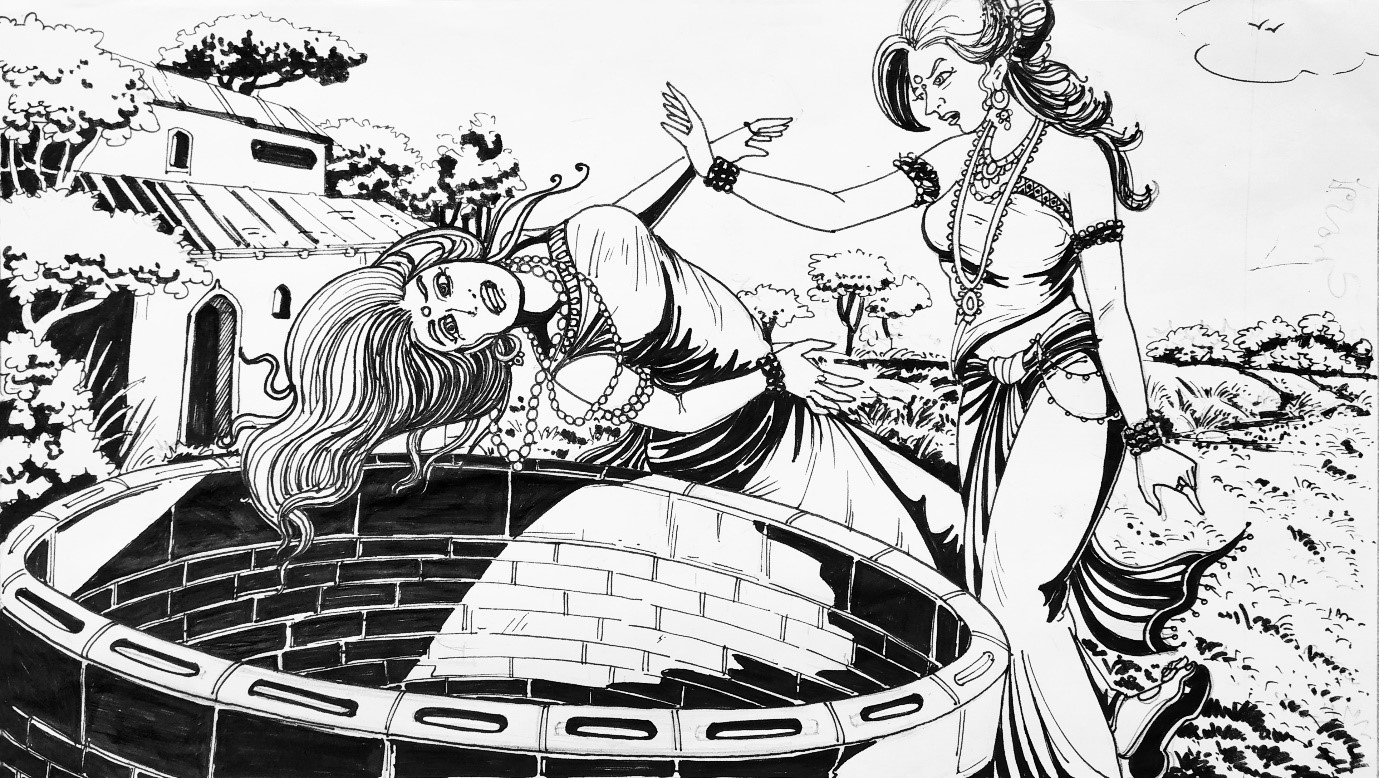 Devyani started saying unpleasant words about Sharmishtha and her father, this angered Sharmishtha to the extent that she pushed Devyani into a nearby well and went back to her palace along with her entourage.

Around the same time King Yayati was passing through the jungle and he stopped by the well to drink water. He heard Devyani’s cry for help from inside the well and pulled her out. Devyani thanked him and introduced herself, “O King! I am daughter of guru Shukracharya, Devyani. The way you have held my hand to rescue me, I wish you hold my hand forever and marry me.”

Yayati was taken aback by this sudden proposal from Devyani and said, “Hey Devyani! Your father is the best among the Brahmins and I am normal Kshatriya. We cannot be together.”

Yayati and Devyani parted ways and went back to their respective places, however they kept thinking about each other.

When Devyani reached the hermitage of his worried father, she told him about her fight with Sharmishtha. She told him, how Sharmishtha called Shukracharya a servant of her father, the king. This angered the guru and he decided to leave the kingdom of Vrishaparva.

When Vrishaparva heard about his guru’s decision, he came running. He pleaded to his guru to change his mind. Upon Vrishaparva’s repeated insistence, he left the decision to his daughter, Devyani.

Devyani said, “O Danav king! My father can stay in your kingdom under one condition only, that is if your daughter Sharmishtha agrees to become my servant for life.” 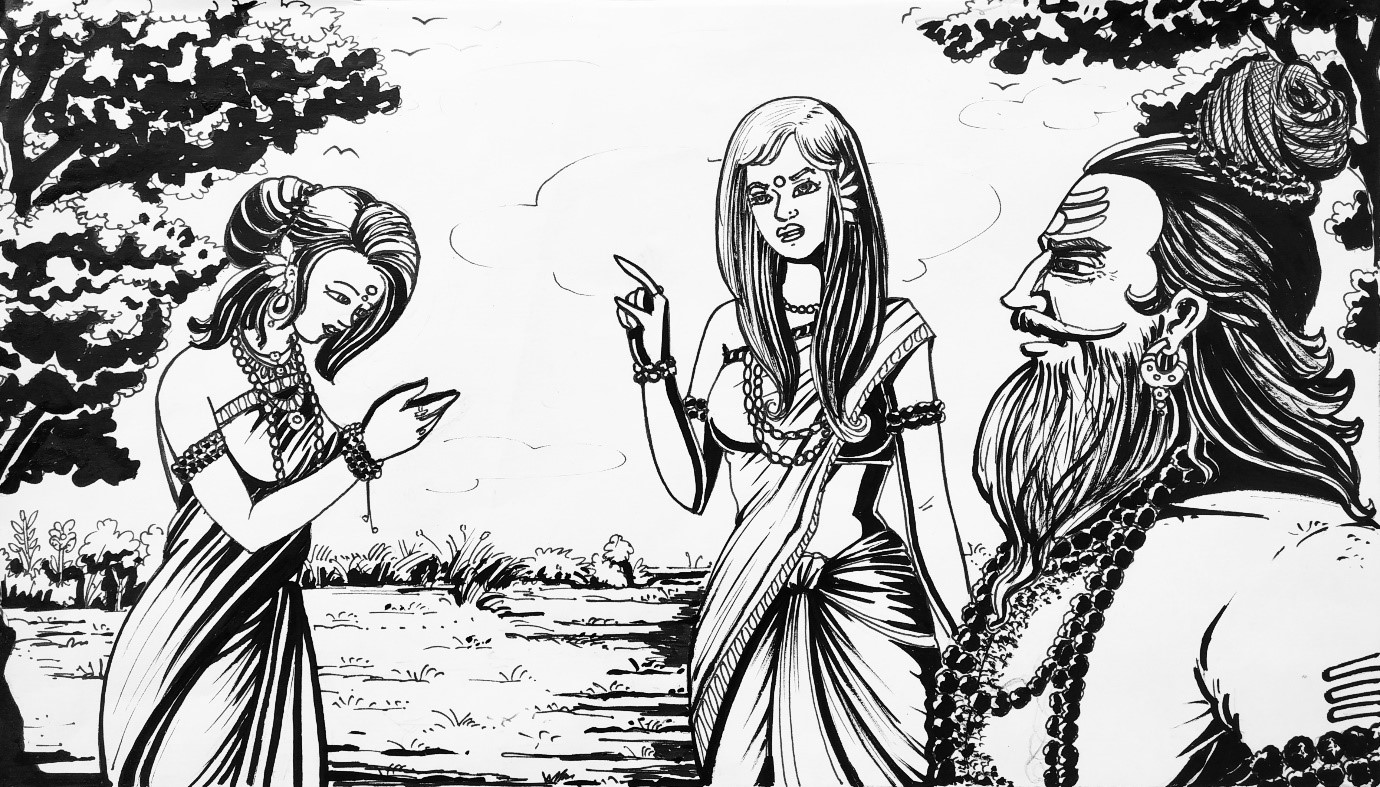 Keeping the welfare of her father and his kingdom in mind Sharmishtha agreed to Devyani’s condition and moved to the hermitage as Devyani’s maid and started taking care of her needs.

One day Devyani along with Sharmishtha were roaming in the jungle, when king Yayati happened to be out on a hunt. When Devyani saw Yayati, she said, “O great king! You are the first man to hold my hand and I wish to become your wife.”

Yayati repeated the answer he gave her last time, “I don’t think your father will approve of our match considering you are a Brahmin and I am a Kshatriya.”

That day after returning to the hermitage Devyani told his father about her feelings for king Yayati and asked for his permission to marry him. She said, “Father! That day when Yayati held my hand to pull me out of the well, I have fallen for him. I wish to marry him and want your blessings for this union.”

Guru Shukra was reminded of Kach’s curse and knew that his daughter will never find a Brahmin husband, also he loved his daughter too much to refuse any of her desires. Shukracharya sent her daughter’s marriage proposal to Yayati, which he gladly accepted. 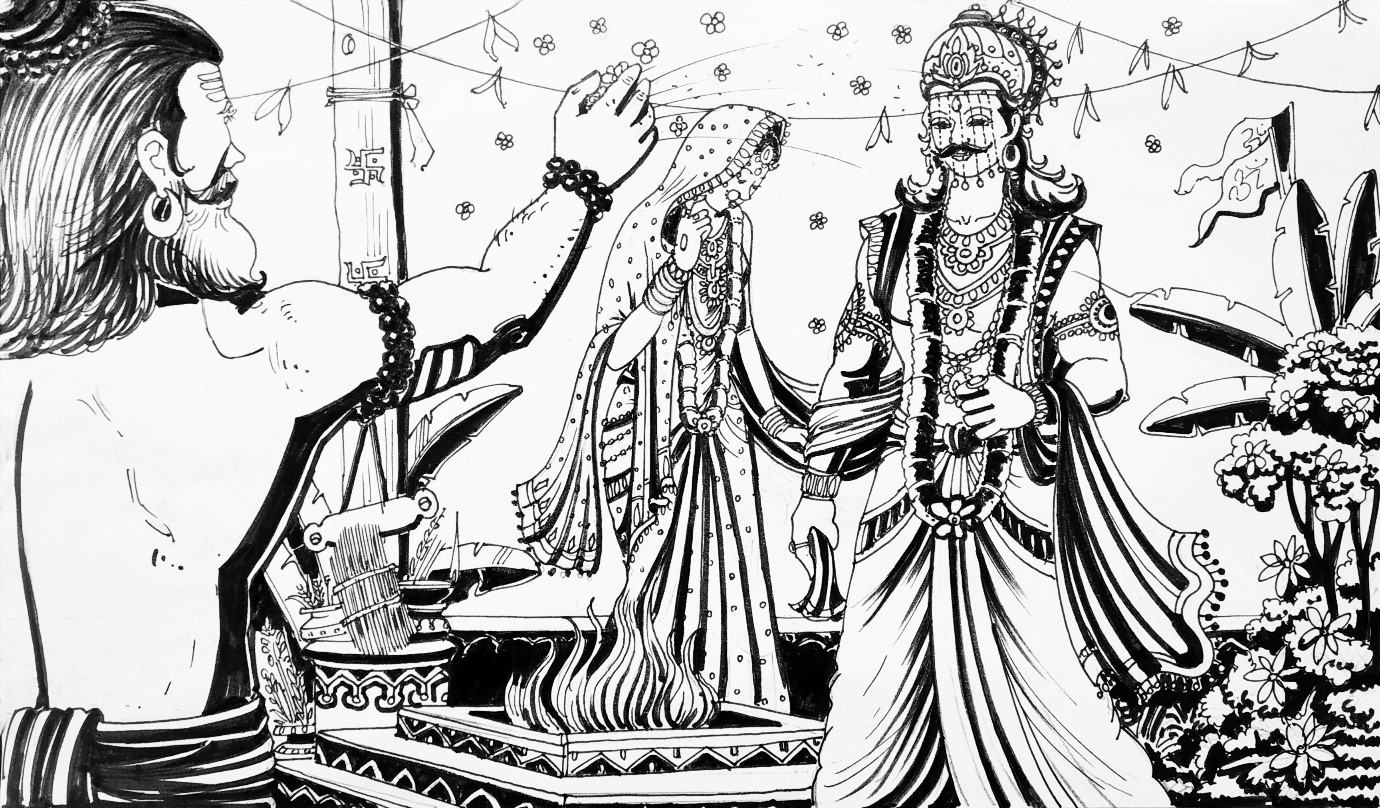 After wedding Devyani went to live with King Yayati at his palace. Sharmishtha, as per agreement joined her as her maid. Yayati arranged for her lodging in a nearby palace, as per Devyani’s request.

One day Sharmishtha started talking to Yayati and told him that she was daughter of Danav king Vrishaparva. Danav princess also told Yayati how she had to agree to become her maid to satisfy her ego.

In time Devyani gave birth to two sons Yadu and Turvasu and Sharmishtha to three sons Druhyu, Anu and Puru. 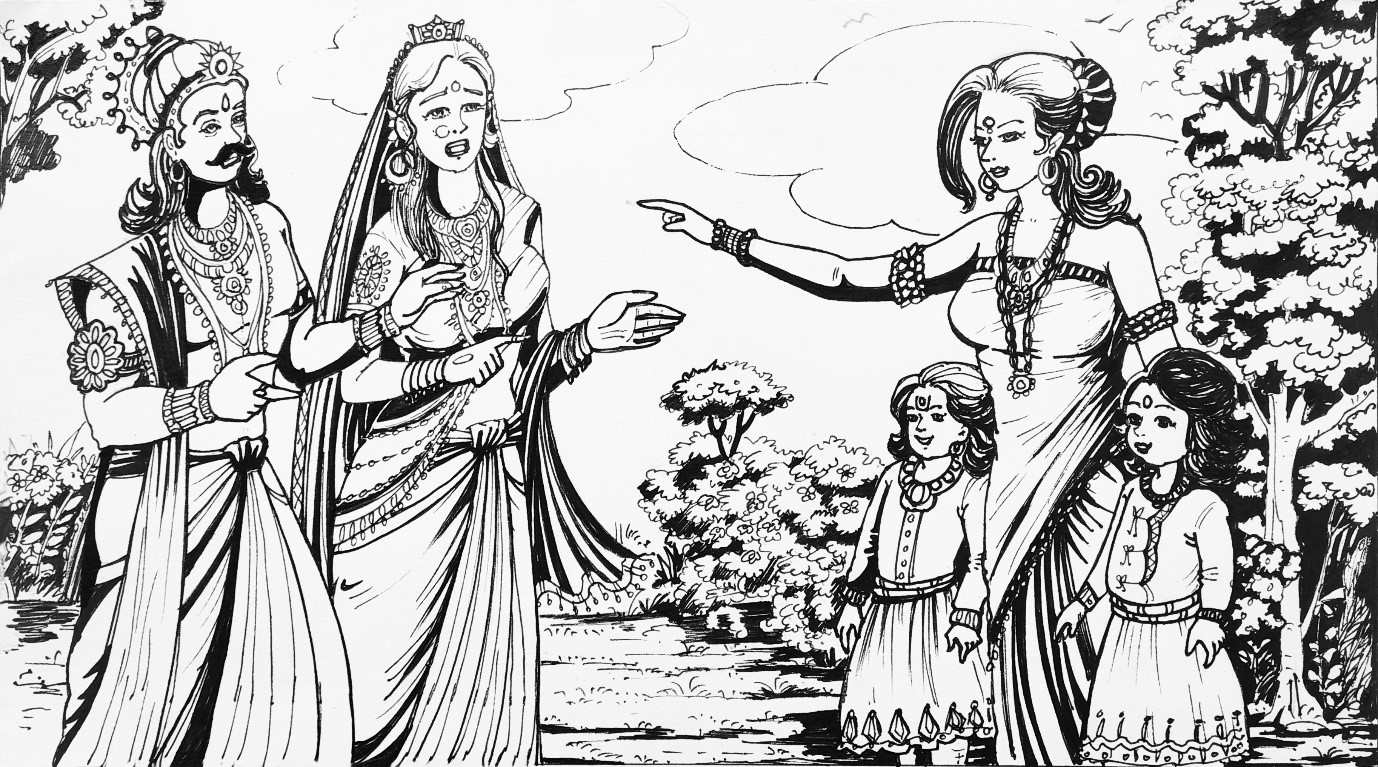 When Devyani found out about Yayati’s relationship with Sharmishtha she was filled with rage and left the palace to live in her father’s hermitage.

When guru Shukra returned from Himalaya after finishing his penance of many years, he found Devyani living in the hermitage and asked for the reason. When Yayati visited the hermitage to meet Shukracharya, he cursed him to become old instantly.

Yayati repented and asked for a way out from his curse. Guru Shukra said, “If someone born out of your blood willingly accepts your old age, you will get his youth.”

Yayati called for his five sons and told them about Shukracharya’s curse. He requested his sons to accept his old age in exchange for their youth. All of his sons refused except for the youngest son Puru. 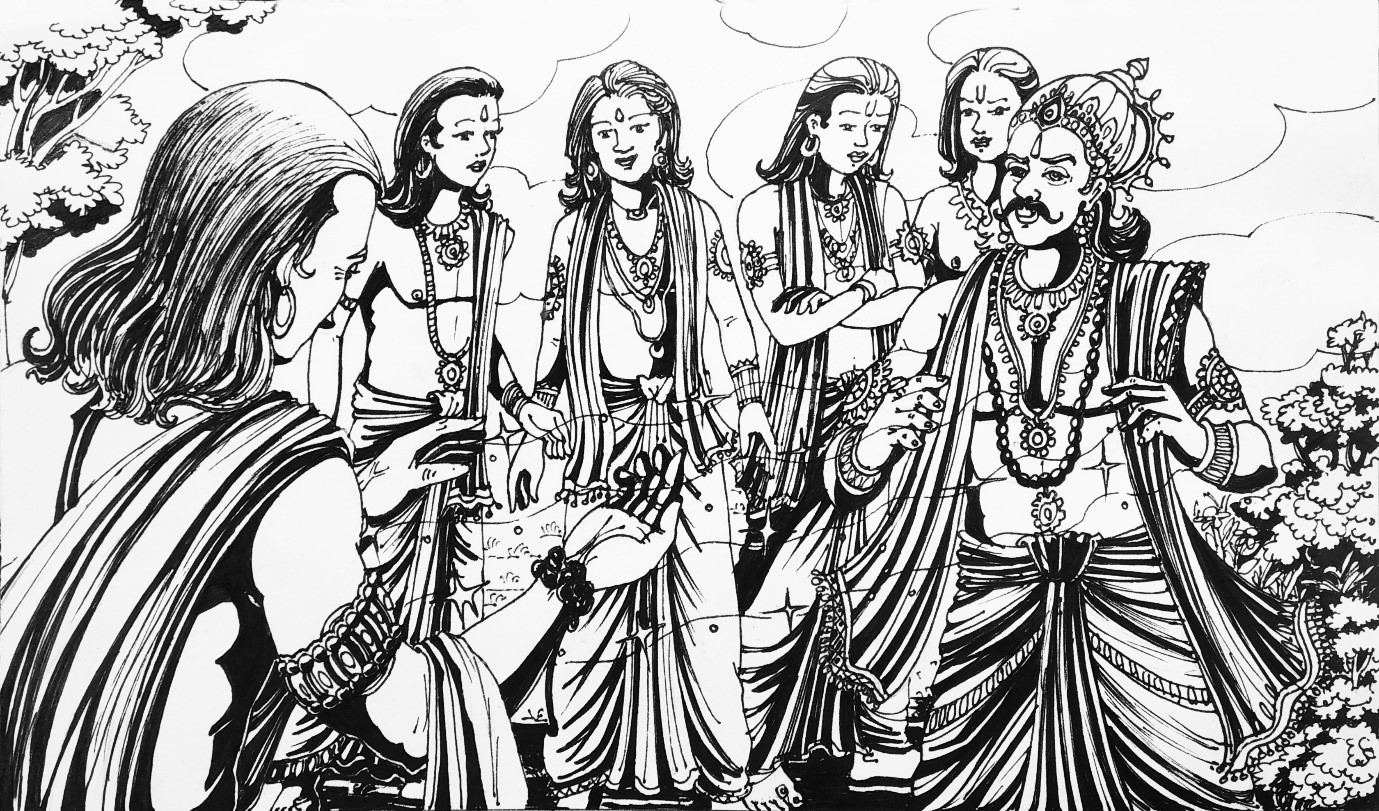 Yayati experience all the worldly pleasures for years only to realise that real pleasure in not in consumption but in sacrifice.

He called his son Puru to return him his youth and went to jungle to live the life for a sage. After many years of penance, he went to heaven.

Since Puru was the one who granted his youth to his father, Yayati made him his successor, thus starting the Puru dynasty, in which all the kings of Hastinapur were born. Yayati’s eldest son started Yadav dynasty in which Shri Krishna was born in Dwapar Yuga.