Churning of the Ocean – Kurma-Avatar

Second of the ten popular incarnations of Bhagwaan Vishnu was Kurma-Avatar. Earlier Shrihari had appeared in the form of a fish to save the earth from deluge caused by cosmic sleep of Brahmadev. This time he appeared to protect the Gods and restore their lost glory.

The great sage proudly wore the garland around his neck and started roaming around. Around the same time, he noticed the king of Gods Indra passing by riding his divine elephant Eiravat. When they crossed path Durvasa rishi offered the garland to Indra. Indra took off the garland from his neck and put it on Eiravat’s head. Intoxicated with the beautiful scent of the flowers, Eiravat picked up the garland from his head and threw it on the ground. 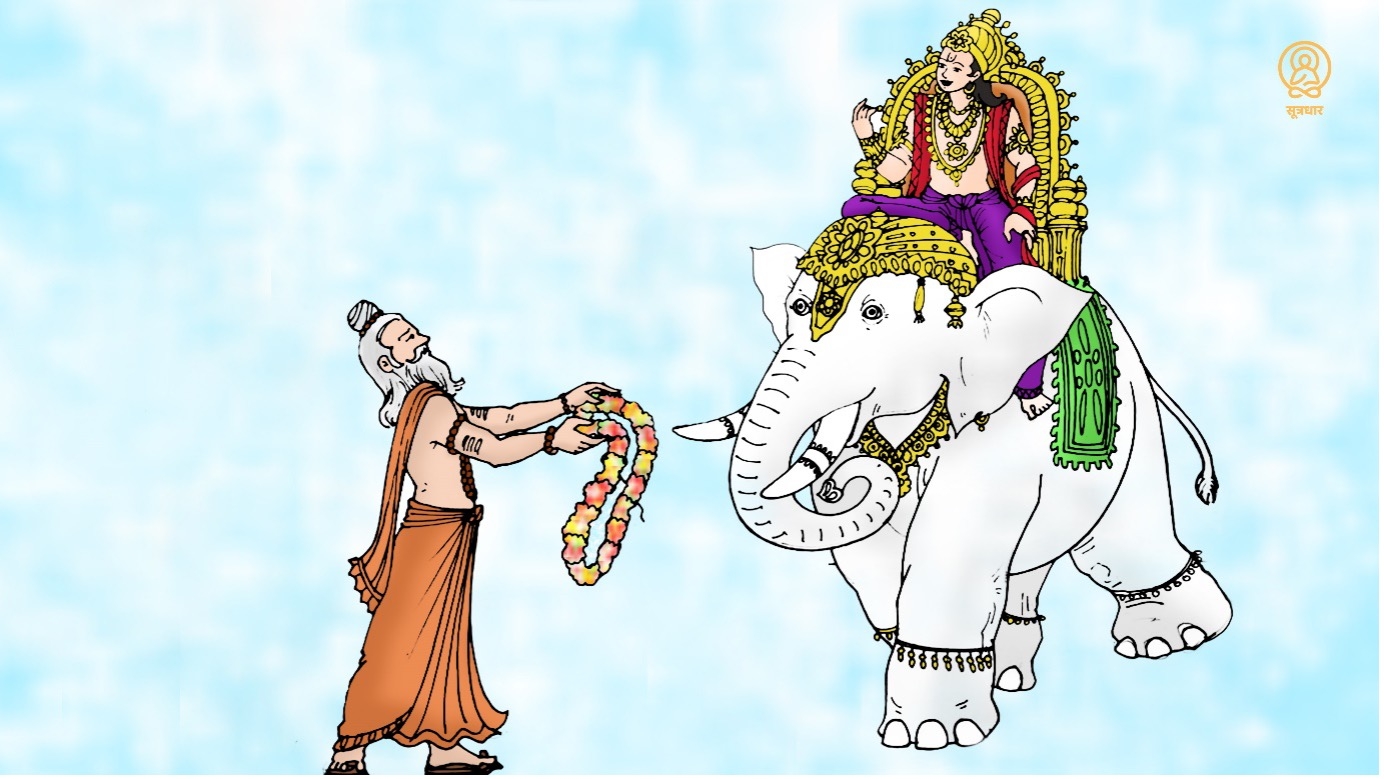 When the great sage saw the garland lying on the ground all destroyed, he got very angry and said, “O Indra! You have become arrogant because of the throne you sit on. In your arrogance you have disrespected the garland I offered to you. Instead of wearing the garland with respect, you have thrown it on the ground. You have disrespected me. O King of Gods! I am Durvasa, whole world fears me for my anger and you have dared insult me. I curse you that you will lose all the power, glory and wealth that has made you this arrogant.”

When Indra heard the harsh words of the angry sage he came down from his divine elephant and landed on his knees in front of the rishi seeking forgiveness for his behaviour. This calmed down the sage and he said, “O Indra! I am Durvasa. I do not forgive. Whatever I have said, will happen. Heaven will lose all its prosperity and you will lose the throne you so proudly sit on.”

After this conversation a worried Indra went back to Alkapuri. Due to the curse Indra slowly started losing his influence. All the good things from the world started disappearing one by one. People stopped worshiping Gods and Mahalakshmi also disappeared. Thus, the Gods started getting weaker by day. Daityas who were always in the lookout for the right opportunity to attack Gods and drive them away from Alkapuri sieged the moment and captured Alkapuri.

Thus, having lost everything Indradev along with all other Gods approached Brahmadev for guidance. After hearing His grandsons patiently, the creator of the universe suggested they seek help from Bhagwaan Vishnu. 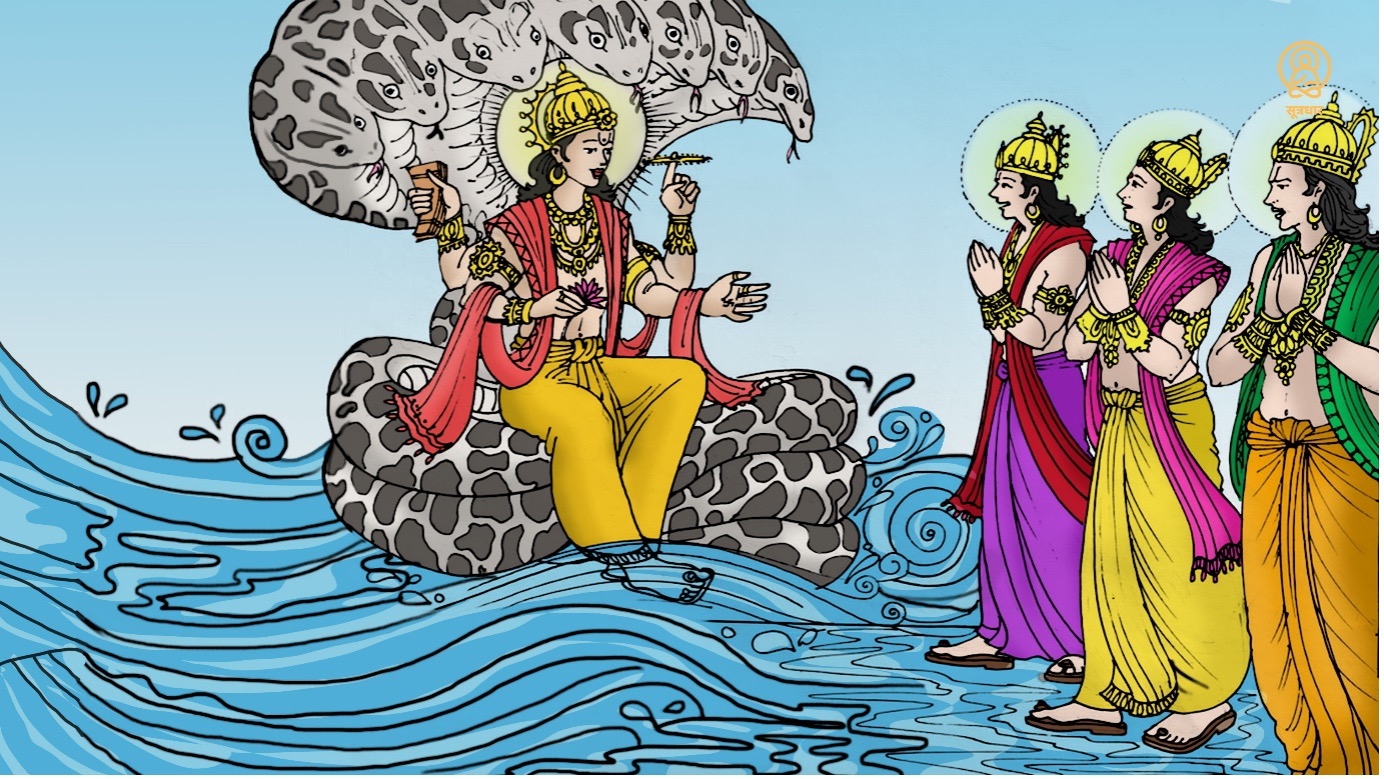 All the Gods lead by Indra reached Vaikuntha to seek His help is defeating Daityas and regaining their lost possessions. After greeting Narayana with folded hands, Indra spoke, “O Vasudev! Due to the curse of rishi Durvasa, we have lost all our powers and taking the advantage of this situation Daityas attacked us and forced us to flee from Alkapuri. We have now come to you seeking your protection. O Almighty! We request you to help us regain our lost glory and win the kingdom of heaven back.”

Hearing Gods plead like this in front of Him, Shrihari said, “O Indra! You have come to my protection and I promise to protect you. Your glory and prosperity have lost inside this ocean of milk. Now you need to churn this ocean to regain everything. In the end of this process divine nectar will be produced, which will make all of you immortal. However, this massive task will require Dev and Danav to work together.”

Listening to this plan suggested by Bhagwaan Vishnu, Gods looked worried. Seeing them such, Shrihari said, “Do not worry. I have a plan to ensure only Gods get to consume the nector.” 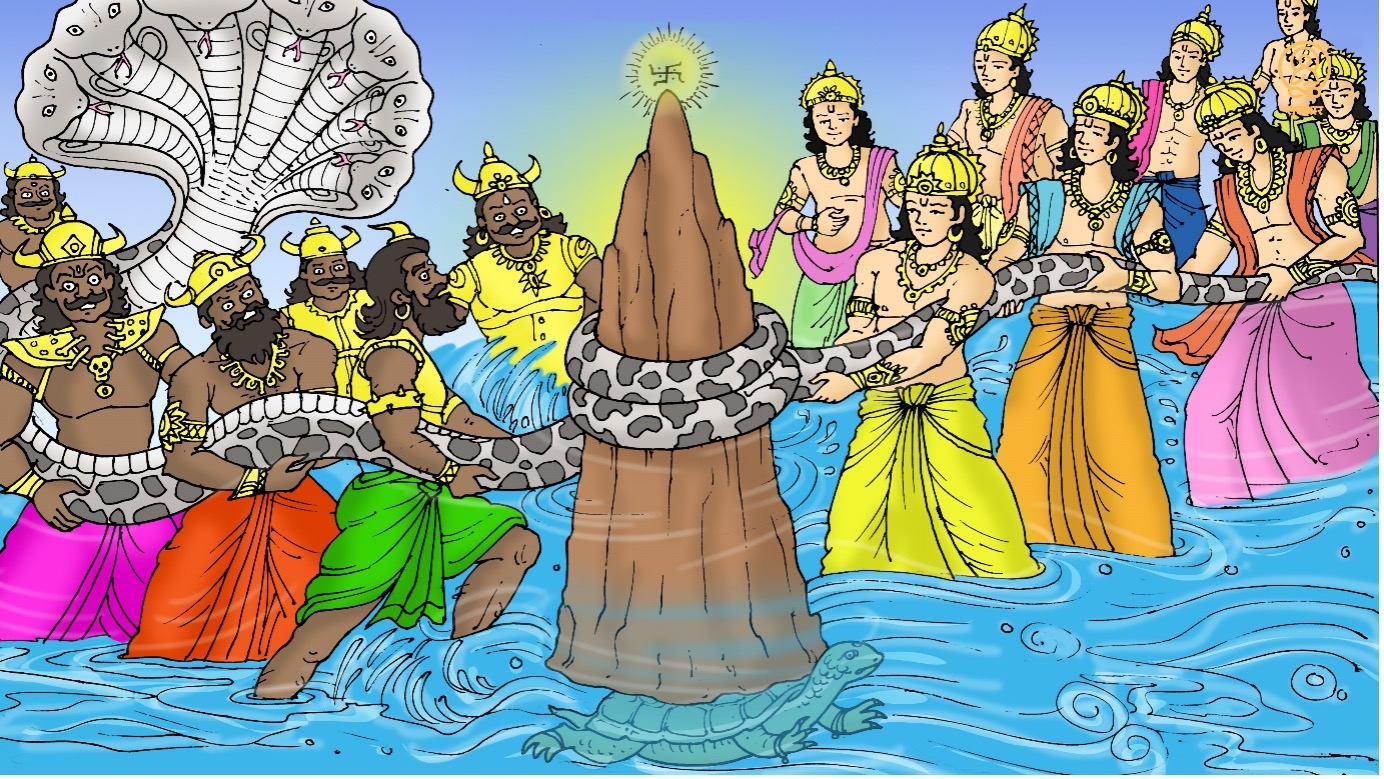 Daityas and Danavas pulled the head side of mighty Vasuki, while Devas pulled his tail. When the churning started the mountain started going up and down uncontrollably. To stop this from happening and allow the churning of ocean to go on, Bhagwaan Vishnu took the form of a turtle and held the mountain on his back, while taking another form to push it with his toes from the top.

Thus, with the help from Narayan, the process of churning of ocean started. The first thing that came out of the ocean was Halahal (हलाहल) poison. This poison was so potent that all the livestock and vegetation started dying coming in contact with it. Dev and Danav were also not immune to it. Brahmadev instructed all the snakes to consume this poison however they failed to contain it. 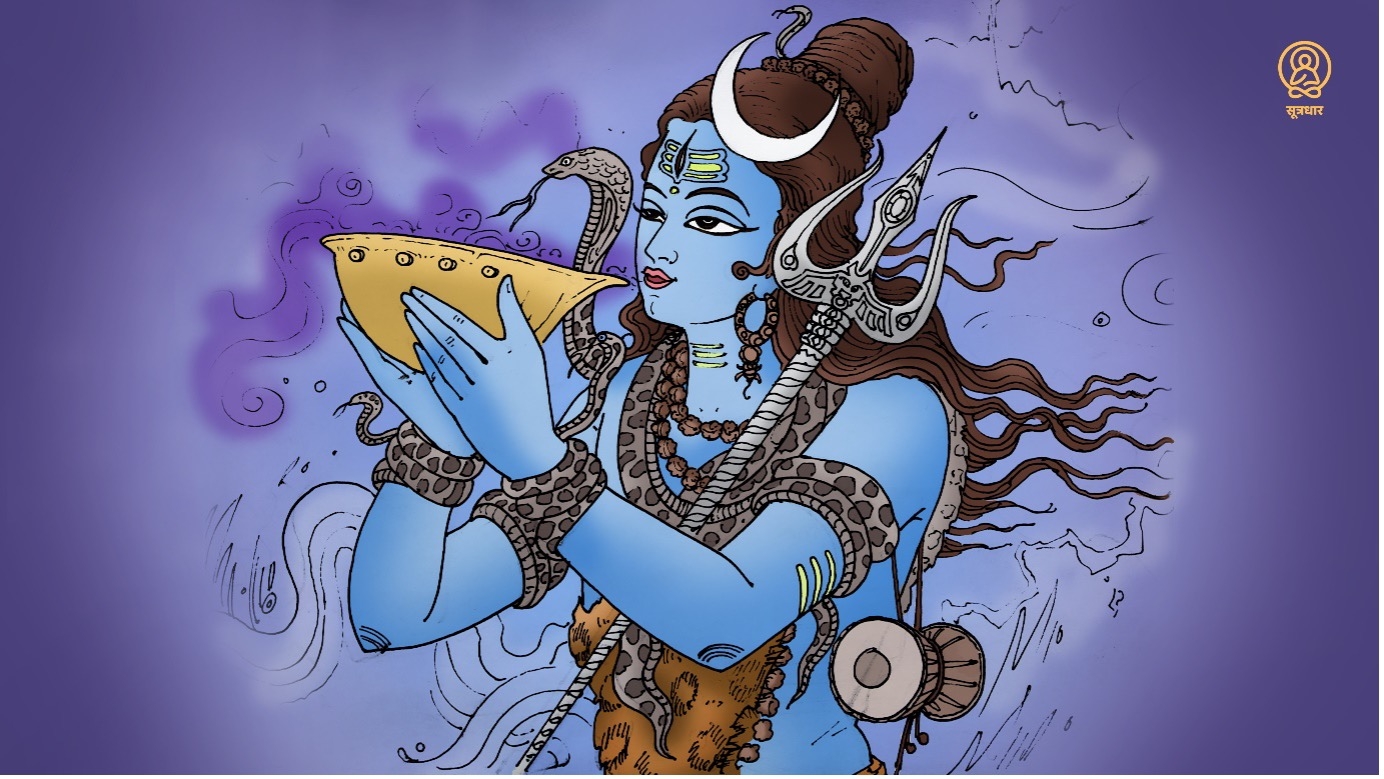 In the end everyone went to Bhagwaan Shankar and pleaded with Him to save the universe from dying because of Halahal poison. Mahadev decided to drink the poison and hold it in his neck. The poison was so potent that Mahadev’s neck turned blue because of it, thus giving Him one of his popular nicknames, Neelkanth (नीलकंठ).

After Shivaji (शिवजी) saved the world by drinking the poison the task of churning of ocean started again. This time appeared a tree with beautiful scented flowers. This Parijaat (पारिजात) tree found its place in Indra’s garden in Alkapuri.

Then appeared Indra’s divine Elephant Airavat (ऐरावत), which had disappeared into the ocean because of Durvasa rishi’s curse. Indra accepted Airavat.

Next appeared wish fulfilling cow Kamdhenu (कामधेनु), which was accepted by sages. Then appeared four headed divine white horse Ucchaishrava (उच्चैःश्रवा), which was given to Daityaraj.

A divine conch shell and Kaustubh gem were next items to appear from the ocean. Both of them were presented to Bhagwaan Vishnu. 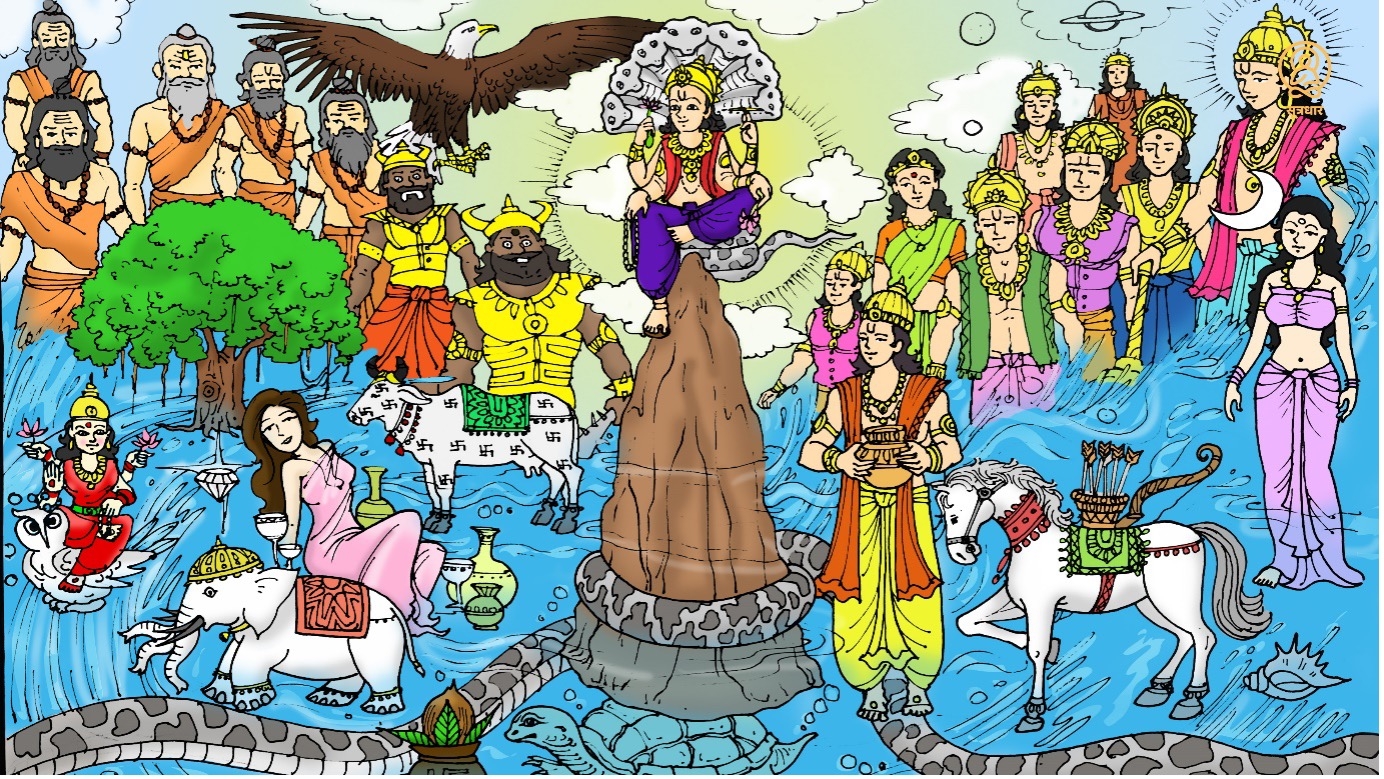 This churning of ocean went on for many more days. Next to appear was moon, who was adorned by Bhagwaan Shankar. Moon was followed by Apsara Rambha (अप्सरा रम्भा), who chose Gandharwalok (गंधर्वलोक) as her abode.

Then appeared Mahalakshmi, who found her place with Bhagwaan Vishnu.

In the end God of Medicine Dhanvantari (धन्वन्तरि) appeared holding the pot of nectar.

The moment everyone saw the pot of nectar, they start fighting among each other. In this pushing and pulling few drops on nector fell on earth. Four places where drops of nectar fell were Haridwar (हरिद्वार), Prayag (प्रयाग), Triyambak (त्र्यंबक) and Avantika (अवंतिका). This is the reason behind Kumbha (कुम्भ) celebrations in these places. 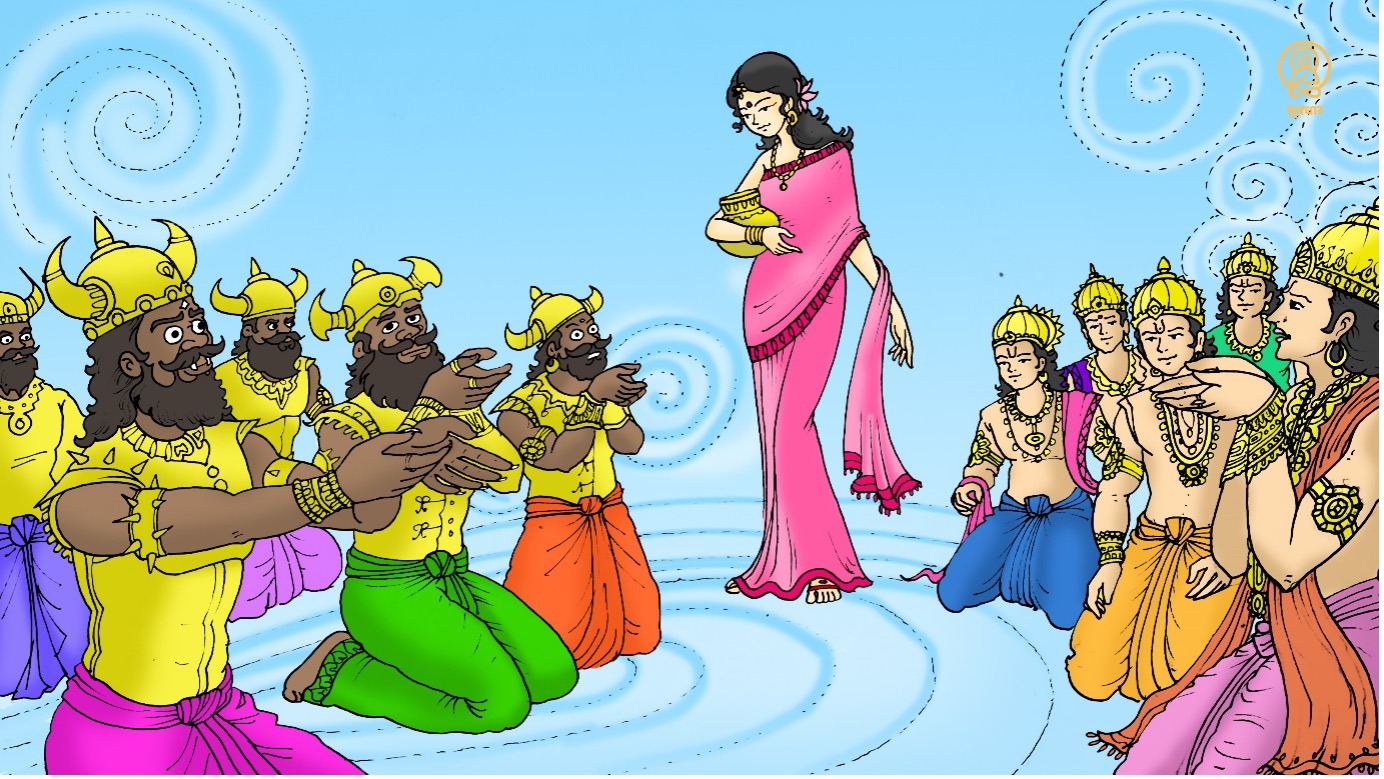 To stop this fighting Bhagwaan Vishnu took the form of the most beautiful woman Mohini and appeared in the middle of Dev and Daitya. All of them got smitten by the beauty of Mohini and voluntarily handed over the pot of nectar to her.

Mohini started distributing Nector to Gods. At this point a Daitya named Swarbhanu (स्वर्भानु) disguised himself and sat among Gods. He also got the drops of nectar from Mohini; however, Sun and Moon noticed this trickery and alerted Mohini.

Mohini summoned Sudarshan chakra and beheaded Swarbhanu. Since he had already consumed nectar he did not die. His head became Rahu and body became Ketu. Since then they are angry with Sun and Moon. 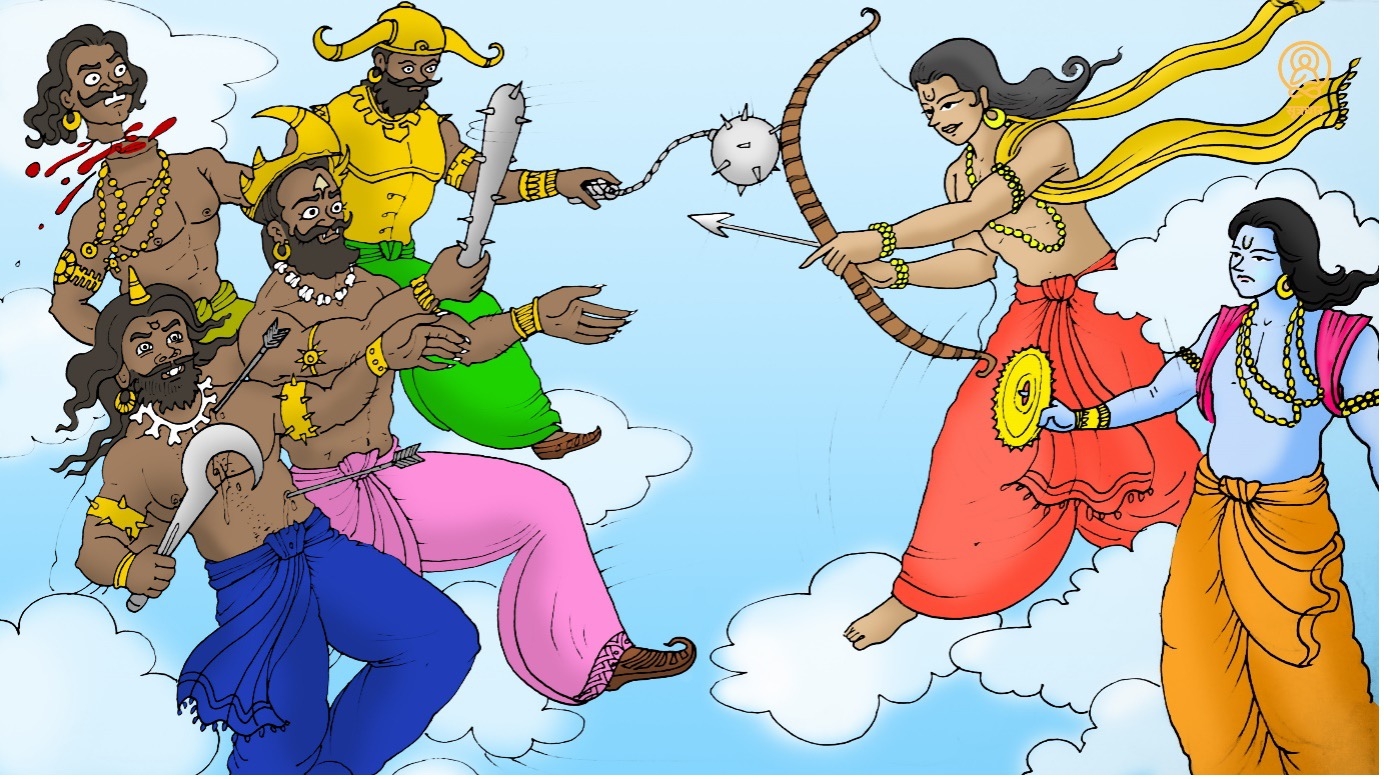 At this point Dev and Daitya started fighting with each other and Bhagwaan Vishnu appeared in the form of twin sages Nar and Narayan to fight from the side of Gods. Nar and Narayan along with army of Gods fought against Daitya army and killed most of them. Remaining Daitya army ran to Patallok to save themselves.