Who was a Suta?

Who was a Suta?

We often come across the narrative that Karna, who was adopted by a Suta family, faced discrimination all his life because of being a Suta. This somehow alludes to the fact that Suta was a low caste and was discriminated against by upper caste people.

Surprisingly this discrimination theory is not put forward in context of other Sutas mentioned in our epics.

In order to analyse this whole situation we need to first understand, who was a Suta?

Mahabharat has the following verse explaining the origin of Suta. Here Bhishma pitamah is telling the origin of the King to Yudhishthir while lying on the bed of arrows. Before Prithu Maharaj appeared, two bards Suta and Magadha appeared, who became the rulers of Anupa (Anga) region and Magadha region respectively. 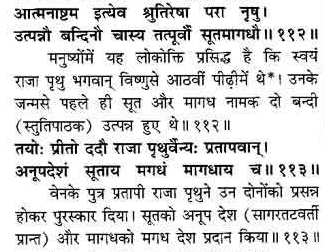 None of these origins in any way mention the position of Suta in caste hierarchy.

Now let’s discuss their social position. Suta were primarily storytellers or charioteers; both were highly respected and important professions. Almost all the Brahmins were well versed and trained in the art of storytelling while the Kshatriya were trained as a charioteer. Storytellers like Lomaharshan and his son Ugrashrava were highly respected while Shrikrishna and Shalya who were both great warriors played the roles of charioteers. Charioteers usually were very close to the warriors and were good friends, Sanjay was Dhritarashtra’s charioteer and is referred to as his friend and advisor, Karna’s adoptive father Adhiratha was a good friend of Dhritarashtra.

This doesn’t mean Suta were restricted to these professions only and were not allowed to pursue other roles. Karna’s uncle was the king of Anga. Kichaka, the general of Matsya army, was also a Suta. Karna himself was an accomplished warrior and was made king of Anga.

When somebody was referred to as Sutaputra, they were simply referring to their lineage and not using this as a derogatory term.

Did Pandava discriminate against Suta? Abhimanyu’s wife Uttara was the daughter of Sudeshna, who was from Suta lineage. Pandava had absolutely no issue accepting her as their daughter-in-law.

After reading this post I hope we now have a better understanding of who Suta were and how they were not a low caste and were not discriminated against in any way.